In my June 14 post I discussed future decreases in average well productivity based on a single average well profile to create scenarios which would match the range of technically recoverable resources (TRR) in a recent USGS estimate for the Bakken/ Three Forks.

A recent discussion at the June 15, 2013 Drumbeat at the Oil Drum was very interesting with Rune Likvern providing  great insight (as usual) into recent data on Bakken output in North Dakota.

I have created various well profiles in an attempt to match James Mason's work, Rune Likvern's work, the NDIC typical well, and the actual production data from the NDIC.  I have recently created some newer well profiles by using a minimization of the sum of the squared residuals between the model and data over the period from Jan 2010 to April 2013.  When no constraints are put on the minimization we get qi=11070, b=0.41, and d=0.078 (I call this model 7).

where  q is output in barrels/month in month t,
t is months from first output

(I use t=0.5 for my first month and then increase by 1 for future months so that I get mid month output.)  The well profiles can be easily reproduced in a spreadsheet.

﻿For the first 3 years these different well profiles are nearly identical (in terms of cumulative output), after 5 years model 1 can be distinguished from models 6 and 7 and it takes 6.5 years before models 6 and 7 start to show a significant difference.

I have used these profiles and created some new scenarios where it is assumed that up to Dec 2014 there is no decrease in average well productivity and that from May 2013 to Dec 2014 150 net wells are added each month (1800 wells per year).

﻿
Note how closely the 3 models match up to October 2013, if the data starts to match models 6 or 7 in future months it may be that well productivity has decreased or it might mean that the well profile matches with model 6 or 7.  As we get more data on wells for years 3 and later we will be able to define the average well profile with greater certainty.  Mr Likvern has done the most work in this area, but to my knowledge he only has data up to about 28 months, I have only seen numbers though Year 2 (from Mr. Likvern) and I do not have the month by month data, only yearly totals for year 1 and year 2.

All of this got me thinking about my previous post and trying to match the range of USGS estimates from F5 to F95 by varying the decrease in well productivity.  Maybe we can do this a little differently and create a single scenario which matches the USGS Mean TRR for model 6 (the middle curve in figure 1).  We leave the scenario the same as in figure 2 up to Dec 2014 (no decrease in well productivity up to that point and 150 wells/month 5/13 to 12/14).  Then the number of wells per month ramps up to 167/month by April 2016 and remains at that level until we reach 42500 wells in 2032.  For model 6 and a Mean TRR of 5.8 BBO well productivity decreases as follows:

We use this same decrease in well productivity for model 1, 6 and 7 to create the following 3 scenarios:

﻿These scenarios do a good job of covering the range of the USGS estimate (3.5 to 9 BBO) and range from 3.6 to 8.8 BBO.  I have not attempted to include prices, but may introduce my low price scenario (close to the EIA reference price case) to see how profitability considerations will reduce the URR.
A question for any one in the oil business, how low can we get well completion costs in the Bakken over the next 20 years, is it realistic to assume we can get from $9 million/well down to $4.5 million per well (in Jan 2013 $) by 2033?  If not, what number is realistic?

I am hoping to introduce technology into my model and I plan to use well completion costs as a proxy for technological advances.

Many of my previous scenarios used model 3, so I am presenting a comparison of model 6 and 3 where all of the same assumptions were used as in figure 4 above: 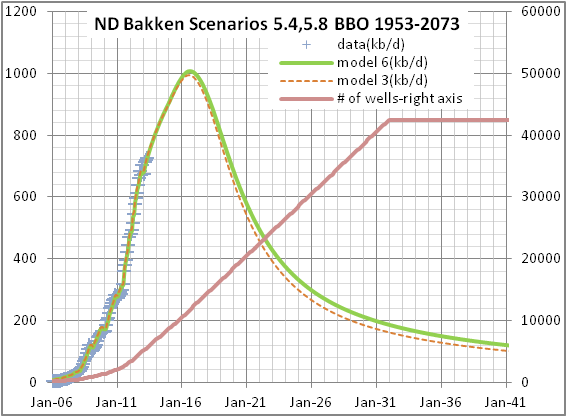