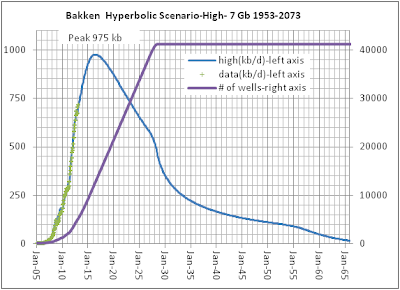 Note that all images can be enlarged with a mouse click.
Above is one possible scenario for future output from the Bakken which suggests a total cumulative output of 7 billion barrels (Gb) from 1953 to 2073.  Current US crude oil inputs to refineries is about 15 million barrels per day  (52 week average above 14.9 MMb/d for past 6 months) which is 5.475 Gb per year, the total Bakken output of 7 Gb would supply current refinery inputs for 1.27 years.  When we account for the 0.57 Gb of Bakken which has been produced we are left with about 1.2 years of crude inputs at current levels.
The above estimate is based on  a presentation from the North Dakota Industrial Commission (NDIC) Oil and Gas Division (see slides 25 to 30).  This presentation suggests about 41,000 wells will be drilled in the Bakken at a rate of 1500-3000 wells per year, I chose 2460 wells per year and a total of 42,000 wells drilled by Sept 2028. 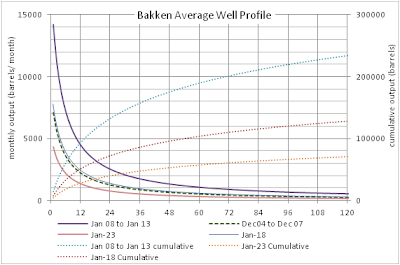 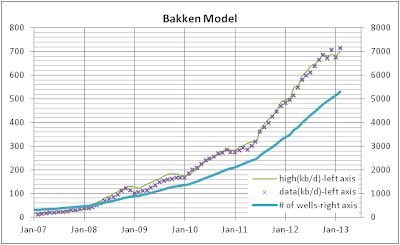 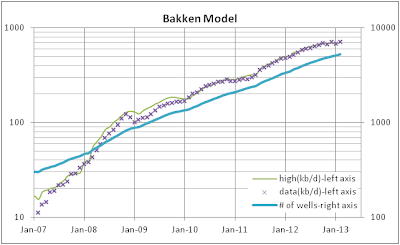 ﻿
Each of these plots uses the average well profiles presented previously in combination with Bakken historical data from the NDIC, the model matches the data fairly well from 2007 to 2013.
If we substitute the NDIC typical well or Mason's model for the "average Bakken well" we find: 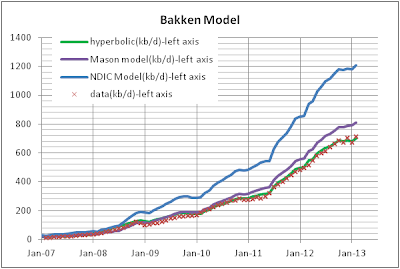 If we extend these using my original scenario: 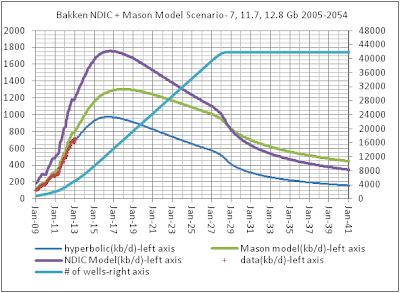 The lowest of these three curves matches the data much better than the NDIC Typical Well or the model presented in James Mason's paper.  As a side note, the NDIC typical well matches a hyperbolic with qi=27500, Di=0.19, and b=0.95(see chart below), the hyperbolic matching the data uses the same qi as Mason's model, but uses the Di, and b matching the NDIC typical well, so it is a hybrid of the two. 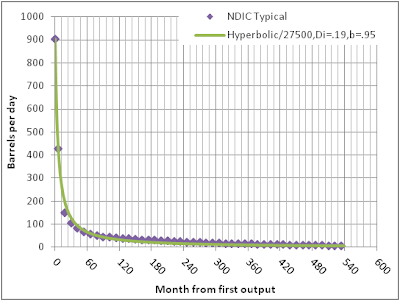 Finally the model presented in the first chart is rescaled so that it can be more easily compared with  scenarios presented in previous posts. Most of these scenarios had a less rapid decrease in productivity of the average well after Jan 2013 (usually 0.5 % each month or 6 % per year).  The earlier scenarios also increased the number of new wells more rapidly and topped out at a rate of  3000 new wells per year, the model below reaches 2460 new wells per year (205 per month) in June 2016 and remains at that level for 10 years. 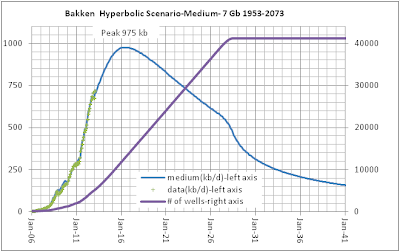 We will explore a few variations in future scenarios in an upcoming post.
DC﻿
Posted by Dennis Coyne at 3:12 PM