Based on suggestions from WebHubbleTelescope that a World URR (ultimate recoverable reserves) of 2800 Gb (billion barrels) for C+C(crude oil plus condensate) is too high (but maybe appropriate for C+C+NGL), I created a different model. The first model was done in early May 2012 and the second a few weeks later.

The second model used a URR of 2560 Gb for C+C based on a Hubbert Linearization (HL) of US EIA(Energy Information Administration) World Data for C+C from 1993 to 2011 (annual data). Many people have commented that the HL method is unreliable and I agree, but I am using it as a ballpark estimate and I recognize that it has tended to underestimate the World C+C URR in the past.
To try to nail down some of this uncertainty over the URR for C+C, I did several HL regressions on the EIA data from 1993 to different end years, to see how the estimate has changed since 2005:

From 2005 to 2008 the HL method points to a URR of about 2700 Gb, the URR drops to about 2600 from 2009 to 2011. This may simply be an artifact of the slower world economic growth over the period from 2009 to 2011. Also note that the 95% confidence interval becomes narrower as more data is included (not unexpected), these intervals assume a normal distribution which may not be valid, so the confidence interval is in fact unknown.

The second model is below: 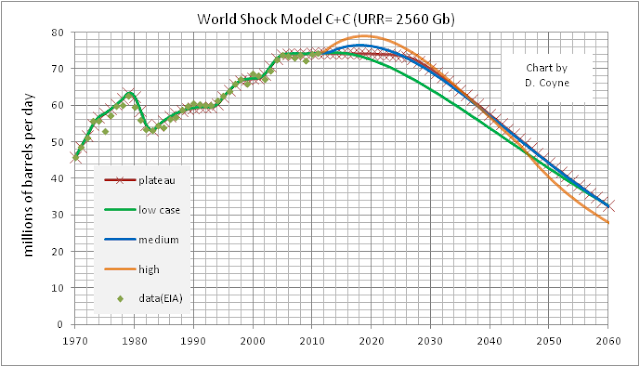 Two different plateau scenarios are presented. The two are identical up to 2023, after that year the first follows the medium scenario and the second attempts to extend the plateau as far as possible. The model uses the same fallow, build, and maturation (6, 8, and, 10 years) characteristics of the first model.

The two models can be compared on the same chart to give a low and high peak and plateau scenario. Two peak models “low 2560” (the low scenario from the chart above in today’s post) and “med 2795” (the medium scenario from my July 20 post) are presented and two plateau models (I used the plateau2 model from the chart above for the “plateau 2560” case (see chart below). 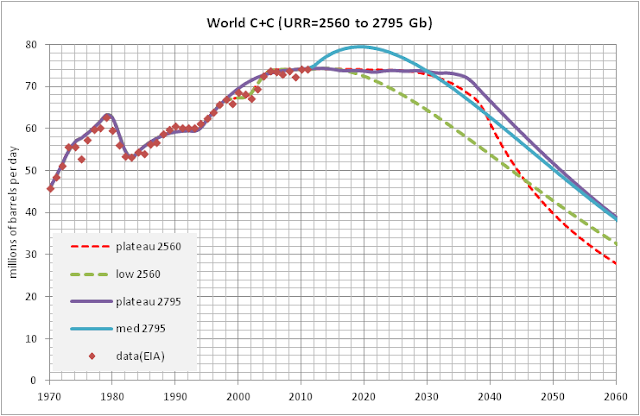 A future where crude oil peaks over a short period (less than 10 years) is likely to fall somewhere between the low 2560 curve and the higher med 2795 curve. A future where the current 7 year plateau (the so-called "undulating plateau" scenario) continues for 19 to 24 more years would fall between the two plateau scenarios illustrated above. 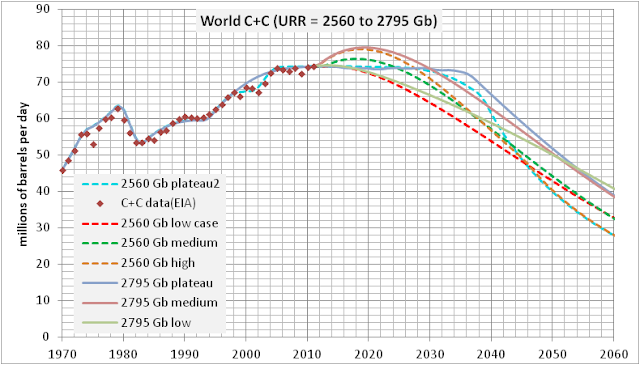 The chart above attempts to present most of the scenarios presented so far (only one plateau scenario has been omitted) on a single chart. It is interesting that there is only a minor change in output up to 2022 for the peak scenarios when the URR increases by 235 Gb. This is not surprising because the increased URR is due to larger future discoveries in the 2795 Gb URR model vs the 2560 Gb URR model.

The Excel spreadsheet "world2560plat.xls" for this model can be found at: