Update to Crude plus Condensate Models

I noticed that compared to a model by webhubbletelescope, that my shock model extraction rates were very high (around 13 % vs. 5.5 % in 1973).  This was due to using different discovery data that had not been backdated.  I have updated the model using better discovery data based on data from ASPO and Jean Laherrere, as well as from the most recent shock model presented on the Oil Conundrum.

Laherrere uses 2200 Gb for his URR for conventional oil + deep water.  If we add oil sands at 170 Gb and Orinoco belt reserves at 220 Gb (390 Gb total) we get a URR of 2590 Gb. An optimistic Canadian geologist might guess that the oil sands could yield as much as 340 Gb, and an optimistic Venezuelan might suggest 260 Gb of URR from the Orinoco Belt.  This combination of oil sands and Orinoco belt oil I call extra heavy oil and will have a URR from 300 to 600 Gb in total.  This is the basis of a C+C URR between 2500 and 2800 Gb.

The new models are below, they use discovery data similar to that presented at the following link: 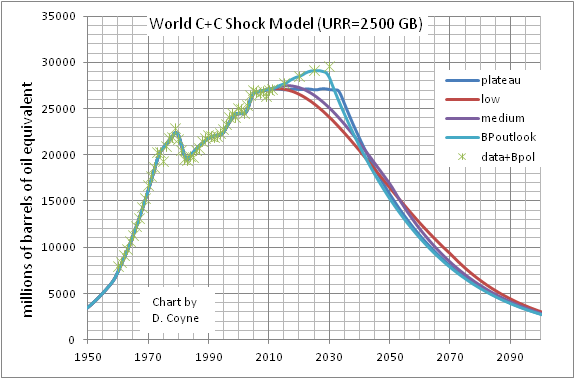 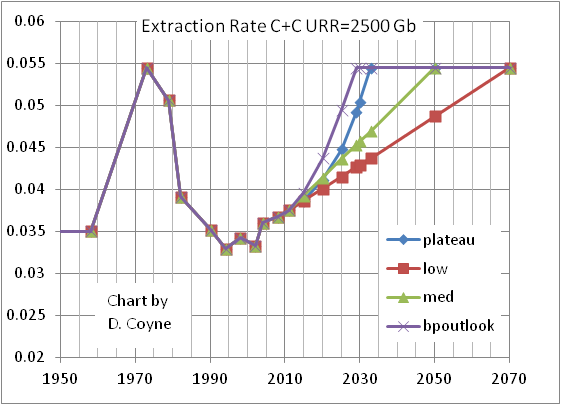 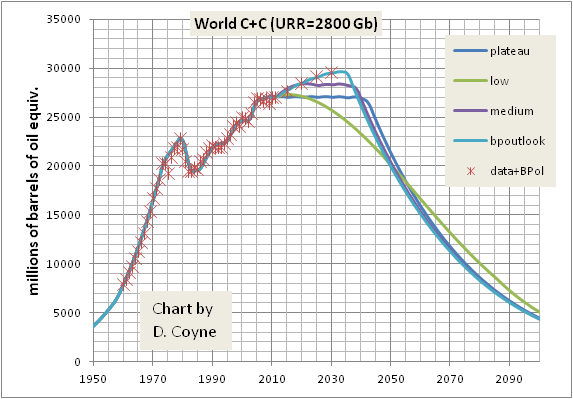 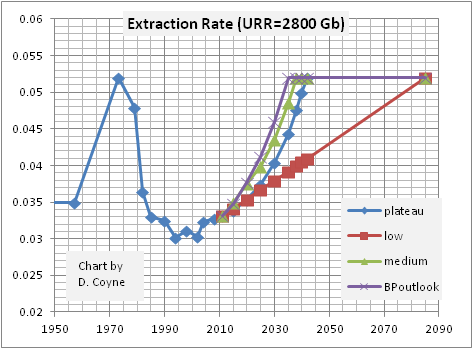 Note that the forecast "data" is from the 2012 BP Outlook (2015-2030), but this outlook has been scaled back by my estimate of future NGL output, which is based on the BP Outlook for natural gas and continued increase in NGL per unit of natural gas to US levels worldwide.  This will be presented in greater detail in a future post.  Also note that NGL only has 70 % of the energy content per barrel compared to crude plus condensate.  I always present NGL on this energy equivalent basis.

Note that there may be a technical limit to how high the extraction rates can rise, I have assumed that today's technology may enable us to match the level achieved in 1973.  The problem is that we do not have the young Middle eastern Giant fields today and the technical challenges of ultra deep water oil, polar oil, tight oil, and extra heavy oil are much greater today than they were 40 years ago.