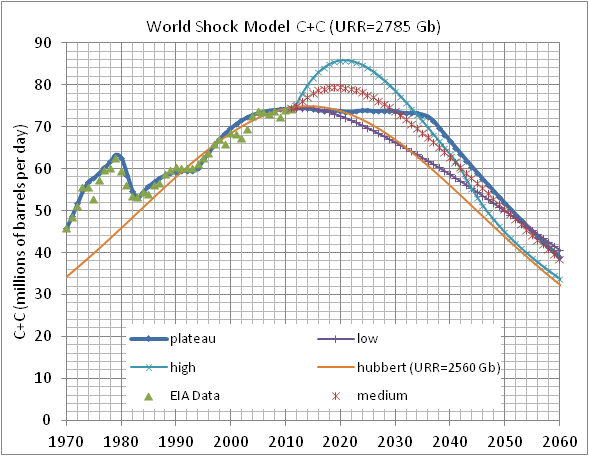 Actual discoveries from 1900 to 2009 were used for the discovery curve with a dispersive discovery model used to fill in discoveries before 1900 and after 2009 where the actual data is unknown (this is essentially a statistical guess using a maximum entropy estimator.)


URR for the scenarios is about 2800 GB for crude + condensate, a Hubbert Curve is also presented based on a Hubbert linearization from 1993 to 2011 using EIA annual C+C data this model has a URR of 2560 Gb.


For future years beyond 2011 four scenarios were created low, medium, high and plateau. All of these have the same URR of 2790 Gb. The difference lies in different rates of extraction from mature reserves, shown  below: 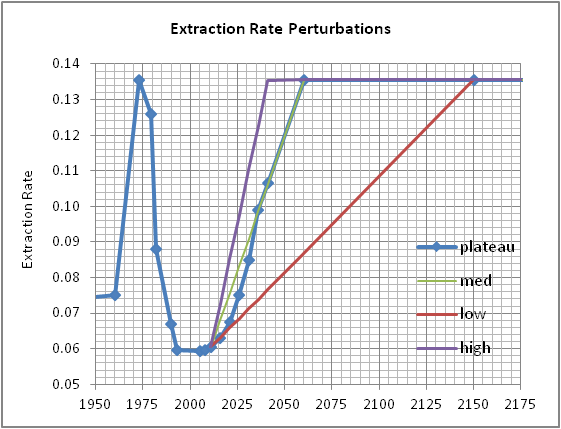 The low scenario matches the hubbert curve rather closely from 2011 to 2035.  The most likely scenarios are the plateau, medium, and low scenarios.


The high scenario attempts to ramp extraction rates to 1973 levels over a 30 year time frame, this seems quite unrealistic when considering that Saudi Arabia and other middle east OPEC members were aggressively ramping up production from 1960 to 1973 at the some of largest oil fields discovered to date.

I chose 2800 Gb as a rather optimistic URR for crude plus condensate.


WebHubbleTelescope offered helpful advice, suggesting that a URR of 2800 Gb is more appropriate for c+c+ngl rather than just crude plus condensate.  His comment led to further modelling which I will discuss later.
DC
Posted by Dennis Coyne at 12:27 PM