The recent World Energy Outlook (WEO) published by the International Energy Agency (IEA) predicts that US unconventional output will rise to 5 million barrels per day (Mb/d) in 2020.  This increased crude plus condensate (C+C) output will primarily come from tight oil in the Bakken trend in North Dakota and the Eagle Ford trend in Texas. 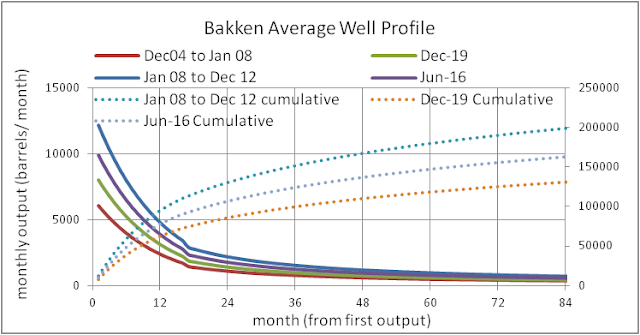 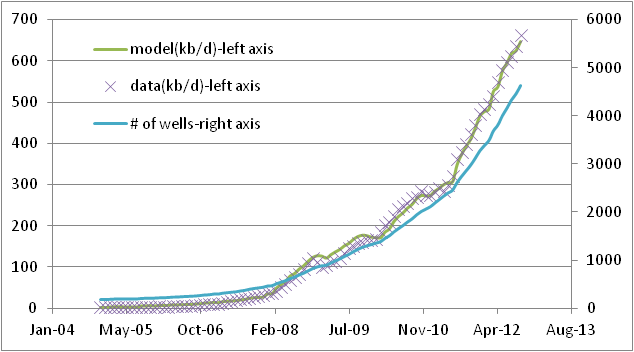 The data for C+C output in barrels per day and number of producing wells can be found here.

In order to forecast future output we assume the average well profile remains unchanged for new wells from Jan 2008 until Jan 2013 and then declines for each month from Feb 2013 to Dec 2019 by 0.5 % as discussed above.

The model by James Mason suggests 40000 wells would be the saturation point for the Bakken with little room for any further increase in producing wells.  In the chart below notice the rapid dropoff in output after Dec 2019 when new wells are no longer added.  If wells continue to be added at 276 new wells per month then 40000 wells are reached in April 2024, at that point (if Mason's model and my model are both correct) we would see a rapid drop in oil production. 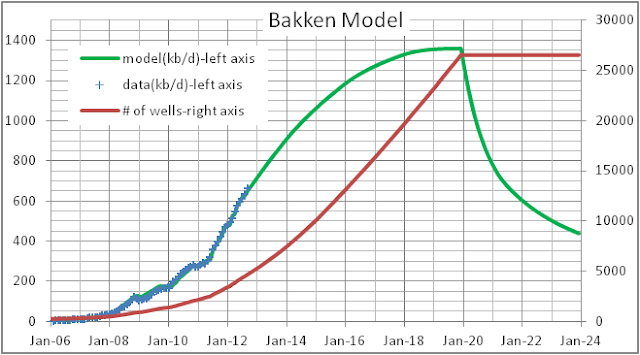 I hope to publish a post on the Eagle Ford soon.  For some flavor of this, consider this chart: 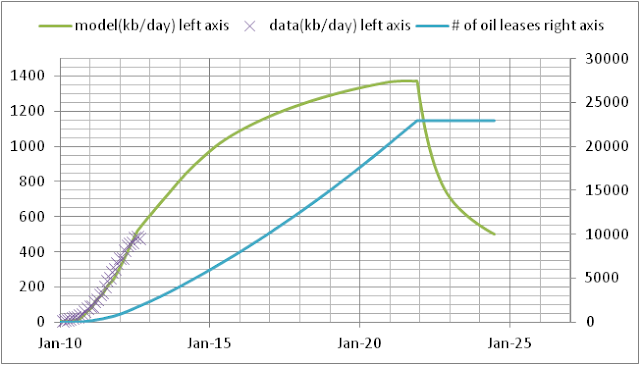 Based on these models I think the upper limit to tight oil output from the Bakken and Eagle Ford in 2020 is about 2.7 Mb/d rather than the 5 Mb/d predicted by the IEA.  Note that these estimates are quite optimistic and should be thought of as an upper bound to what may be attainable. This is an increase of about 1.6 Mb/d over current US tight oil output of about 1.14 Mb/d.  A more realistic scenario might be a doubling of output to 2.3 Mb/d in 2020.