﻿
﻿
﻿
﻿
In this post I will explore a number of different scenarios for future North Dakota Bakken crude oil production using an updated interactive spreadsheet which can be downloaded here.  More details can be found later in the post (scroll down to fig 12 and read the paragraph above that figure).  The new spreadsheet allows the user to change when the decrease in new well EUR begins and the length of time from the start of the decrease in EUR to the maximum monthly rate of decrease.  The earlier spreadsheet presented in my previous post had these two parameters fixed at 6 months after June 2013 for the start of the EUR decrease and 18 months for the length of time for the rate of EUR decrease to reach its maximum. 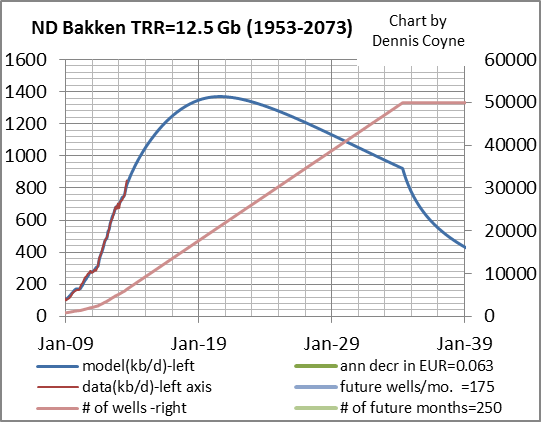 
These two scenarios are quite optimistic, especially the second which under reasonable economic assumptions never reaches breakeven and thus all of these resources would be economically recoverable.  Based on the estimates of the United States Geological Survey(USGS), the chances of the technically recoverable resources (TRR) being above 11.5 Gb are less than 5 %.


Even the first scenario with the lower TRR of 8.5 Gb (mean USGS estimate) is fairly optimistic as it assumes that new well EUR does not begin to decrease until June 2015 and then takes 5 years to reach the maximum monthly rate of decrease in EUR.  This lower scenario reaches breakeven in 2021 and the economically recoverable resources (ERR) would be somewhat lower than 8.5 Gb (likely about 7.5 Gb).


The cases that follow add 200 wells per month(which matches the most recent two months of data) rather than 175 wells per month (as in case 1 and 2).  Also there are changes in when the new well EUR starts to decrease and the length of time it takes to reach the maximum rate of decrease. 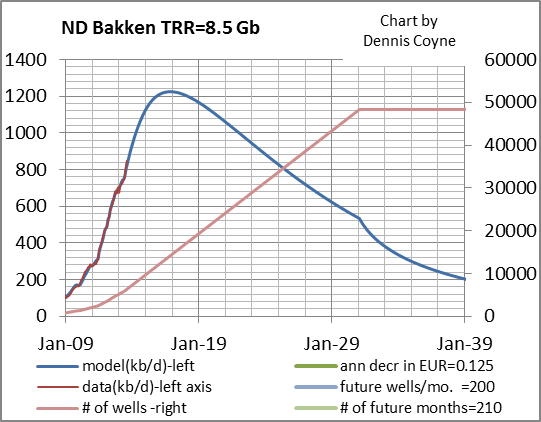 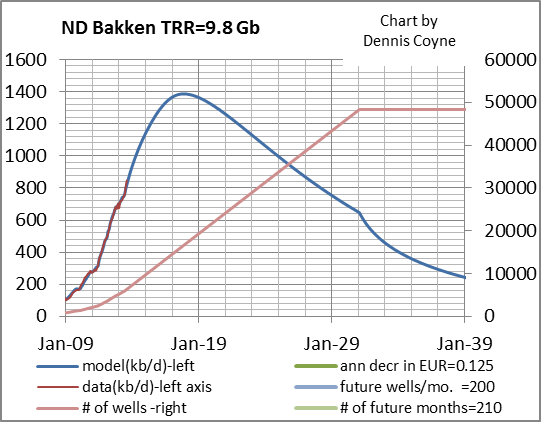 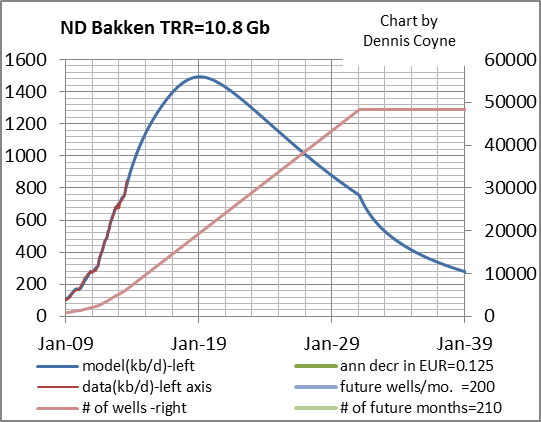 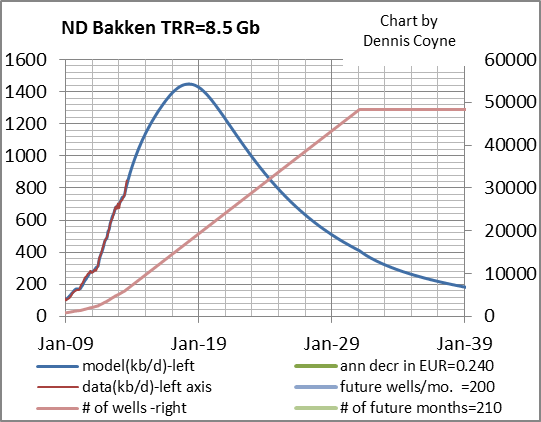 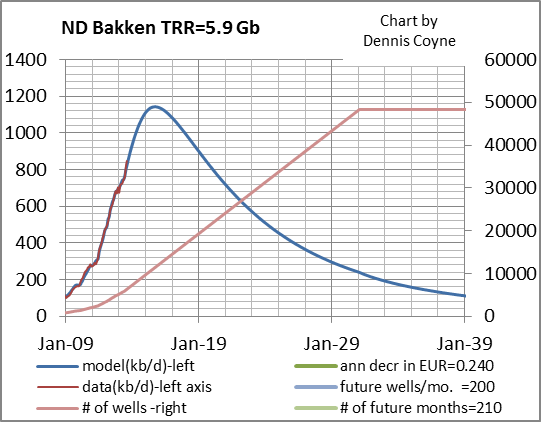 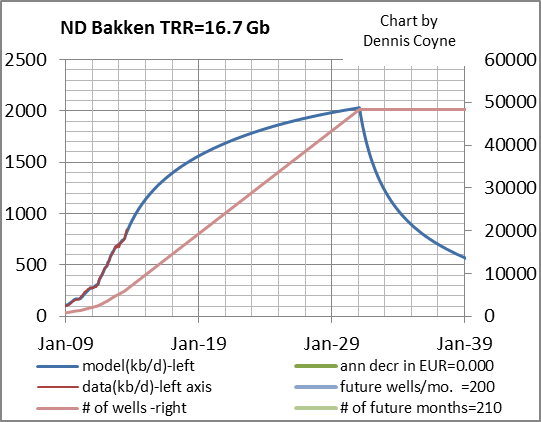 Case 8: This scenario assumes no decrease in new well EUR, cases 3 to 8 assume about 48000 producing wells in 2030 and no more wells added after reaching 48000 wells producing.  This scenario is for those who ask, “what if technological advances allow us to keep new well EUR from falling?”  A problem with the scenario presented in case 8 is that oil company profits per well would be very high at the point that new wells are no longer added which does not make sense. So I developed a more optimistic case. 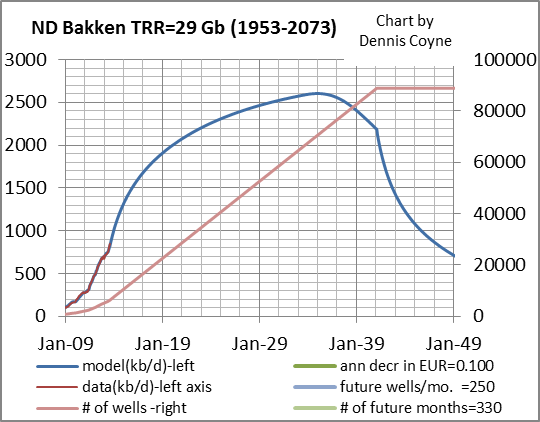 Case 9: New well EUR decrease starts in June 2033(20 years), maximum monthly EUR decrease is reached in June 2038(25 years).  The maximum annual rate of new well EUR decrease is 10 %.  This scenario also differs from case 8 because wells are added at faster rate of 250 wells per month (3000 per year) and the total producing wells reaches almost 90,000 wells.  Note that the x-axis scale has been changed for case 9 in order to show the rapid drop in output after 2040. The TRR is this case is 29 Gb almost 3 times higher than the USGS F5 (5 % probability) estimate.  To call this scenario wildly optimistic would be an understatement. 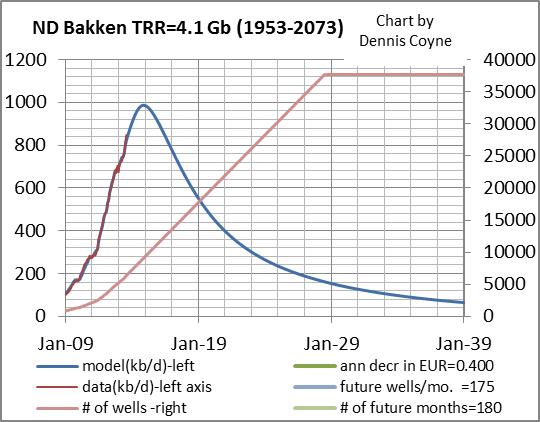 Case 10:  To balance the very optimistic case 9, I created the case 10 scenario.  EUR decrease begins in Jan 2014 (6 months) and the maximum rate of EUR decrease is reached in Jan 2015 (18 months), the maximum annual rate of decrease is 40 % and new wells are only added for 180 months (15 years) and the rate that new wells are added is 175 wells/month rather than 200 wells/month.  Total producing wells reaches about 38,000 wells compared to 48,000 wells in cases 3 to 8.  Breakeven is reached in the middle of 2015 so fewer wells will be added beyond that date when economics are considered. 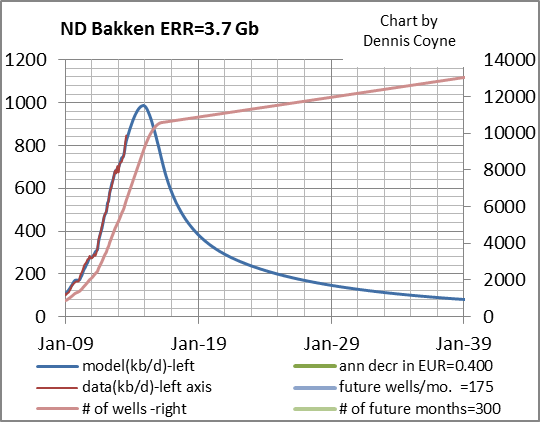 
Case 11:  This case considers the economically recoverable resources (ERR) for case 10, note that the future wells per month of 175 wells/month only applies up to Dec 2014.  After that, wells added per month are reduced by 10 each month in order to keep profits positive.  From May 2016 to Aug 2040 only 9 new wells per month are added and total producing wells reach about 13000 wells in 2040.  At this point new wells are no longer profitable unless real oil prices continue to rise.  Note that as the wells added per month falls to 9 wells/mo, the rate of decrease in new well EUR also falls to an annual rate of 2.5 % per year over the period of 2017 to 2040 from a maximum of 33 % in 2015.
The economic assumptions used for case 11 (all $ amounts are in May 2013 $) are: $9 million for Jan 2013 well cost falling by 8 % per year to $7 million (in Feb 2016) and remaining at that level in real $, real oil prices follow the EIA's AEO 2013 reference case, OPEX are $4/barrel, other costs are $3/barrel, transport costs are $12/barrel, royalty and taxes are 20 % of wellhead revenue (refinery gate price minus transport cost times number of barrels), and the annual discount rate is 12.5 %.


I think that cases 10 and 11 are implausible, but I am trying to cover both the pessimistic and optimistic view points.  I do think that that case 11 is more likely than case 9, but note that the TRR of case 10 is 67% of the F95 USGS estimate (6 Gb) so it is also a low probability scenario (probably less than 1 % probability if the USGS estimates are correct).
The most realistic cases would have economically recoverable resources between 6 and 10 Gb, with the best estimate around 8 Gb.  Cases 1 and 3 are the most realistic presented in this post, case 6 is overly optimistic in my view, I would expect new well EUR decrease to begin sooner than 3 years and to reach its maximum monthly rate of decrease more quickly than in case 6 where the maximum monthly EUR decrease is not reached for about 6 years (in 2019). 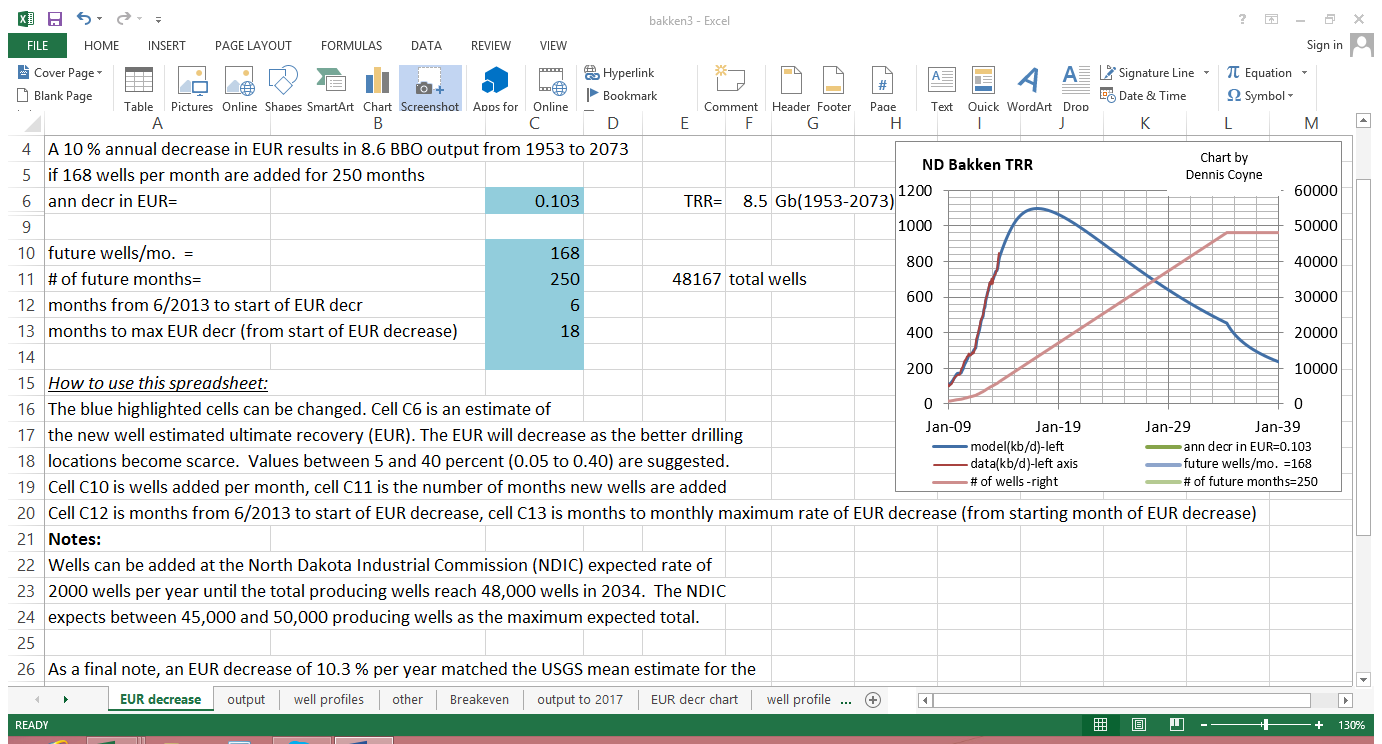 Fig 12
Several other scenarios were explored and the data for these scenarios (figs 13 to 16) can be viewed here in an Excel spreadsheet.
All cases presented below add 175 wells/month for 250 months, total producing wells 49,900. 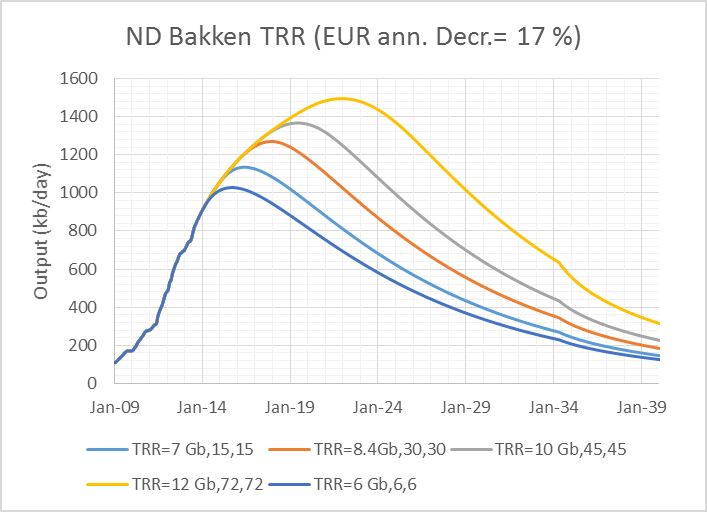 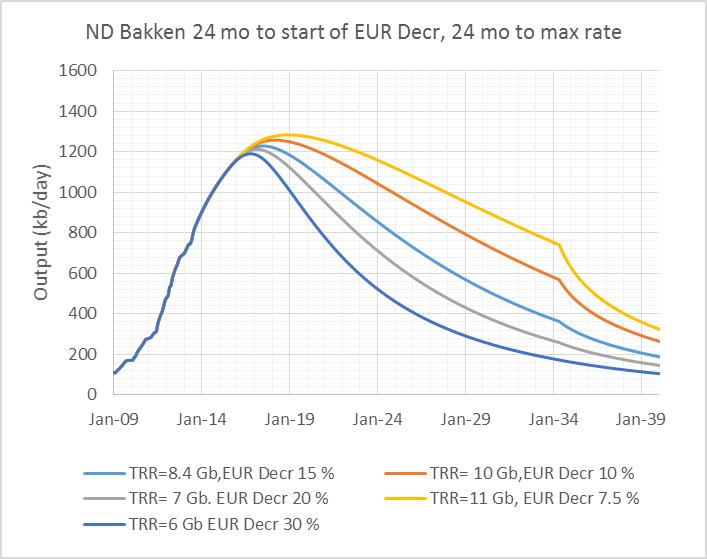 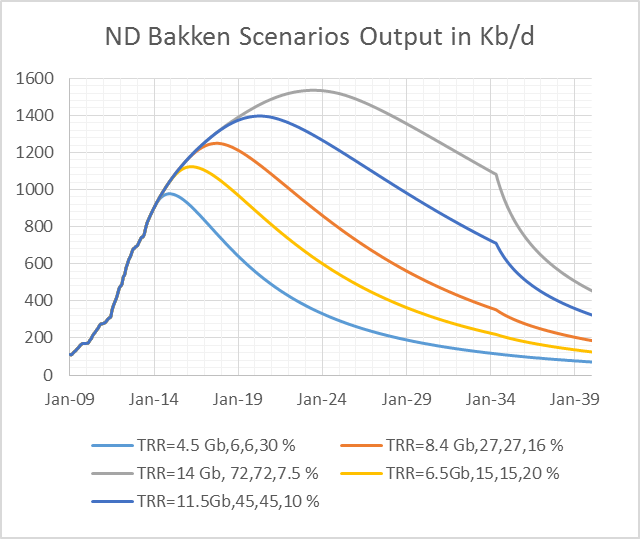 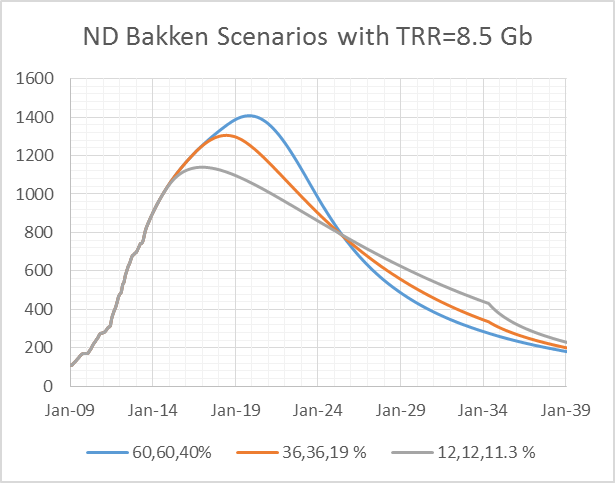