The post that follows relies heavily on the work of PaulPukite (aka Webhubbletelescope), Jean Laherrere, and Steve Mohr.  Any mistakes are my responsibility.

Note that “Conventional” natural gas subtracts US shale gas and US coal bed methane (CBM) from gross output minus reinjected gas for the World.

When shale gas and coalbed methane gas output in the US are added to World Natural Gas, the HL points to a URR of 20,000 TCF, this implies that shale gas, tight gas and CBM might have a combined URR of as much as 9000 TCF.  This matches well with the EIA’s 7000 TCF TRR estimate for shale gas and Steve Mohr’s 2500 TCF estimate for CBM.

I suspect the combined shale gas and CBM numbers will be lower(4000 TCF), but that conventional gas will be more than 11,000 TCF (about 15,000 TCF) .
World Natural Gas HL below (includes all types of natural gas)

Note that the HL estimate is highly uncertain, the conventional estimate could be a little low (Jean Laherrere estimates 12,000 TCF) and combined shale gas, tight gas, and coal bed methane could vary from 2000 to 9000 TCF.

The USGS estimates about 1000 TCF for US continuous gas (tight gas, shale gas, and CBM) and my low estimate is that the rest of the World will add another 1000 TCF from continuous natural gas resources.

The total when added to the HL estimate for conventional natural gas resources is about 13,000 TCF, which is my low case (case A).

I suggest 3 cases, with Case B (the average of case A and C) as my best guess.

Chart with 3 discovery models and cumulative discovery data below.

The gap between the discovery model and the discovery data (for the 19000 and 26000 TCF cases) will be filled by backdated future reserve growth of both conventional and unconventional natural gas discoveries.

As a quick reminder the maximum entropy probability distribution is used to estimate the time from discovery to first production and has the form p=1/k*exp(-t/k) where p is the probability that resources discovered in year zero will become a producing reserve after t years(t=0.5, 1.5,…) and 1/k is the average number of years from discovery to first production. 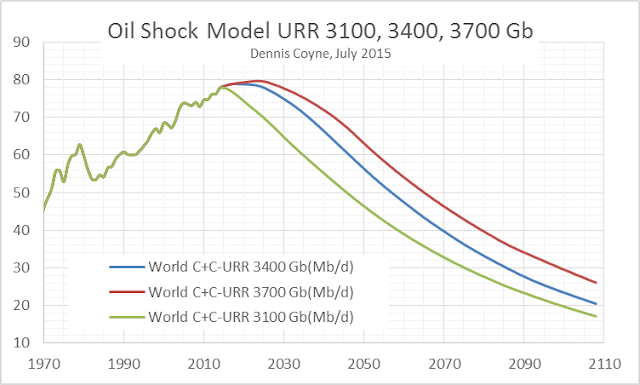 The post that follows relies heavily on the previous work of both Paul Pukite (aka Webhubbletelescope) and Jean Laherrere and I thank them both for sharing their knowledge, any mistakes are my responsibility.

In a previous post I presented a simplified Oil Shock model that closely followed a 2013 estimate of World C+C Ultimately Recoverable Resources (URR) by Jean Laherrere of 2700 Gb, where 2200 Gb was from crude plus condensate less extra heavy oil (C+C-XH) and 500 Gb was from extra heavy (XH) oil resources in the Canadian and Venezuelan oil sands.

In the analysis here, I use the Hubbert Linearization (HL) method to estimate World C+C-XH URR to be about 2500 Gb.  The creaming curve method preferred by Jean Laherrere suggests the lower URR of 2200 Gb, if we assume only 200 Gb of future reserve growth and oil discovery.

Increased oil output in the US has kept World oil output from declining over the past few years and a major question is how long this can continue.  Poor estimates by both the US Energy Information Administration (EIA) and the Railroad Commission of Texas (RRC) for Texas state wide crude plus condensate (C+C) output make it difficult to predict when a sustained decline in US output will begin.


About 80 to 85% of Texas (TX) C+C output is from the Permian basin and the Eagle Ford play, so estimating output from these two formations is crucial.  I have used data from the production data query (PDQ) at the RRC to find the percentage of TX C+C output from the Permian (about 44% in Feb 2015) and Eagle Ford plays (40% in Feb 2015).  Dean’s estimates of Texas C+C output are excellent in my opinion and are close to EIA estimates through August 2014.  I used EIA data for TX C+C output through August 2014 and Dean’s best estimate from Sept 2014 to Feb 2015.  By multiplying the % of C+C output from the RRC data with the combined EIA and Dean estimate, I was able to estimate Eagle Ford and Permian output.  The chart below shows this output in kb/d. 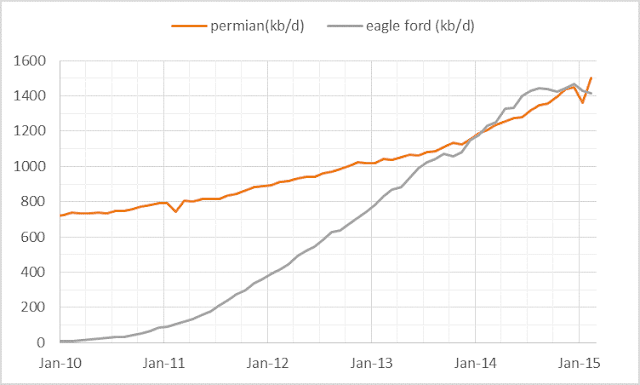 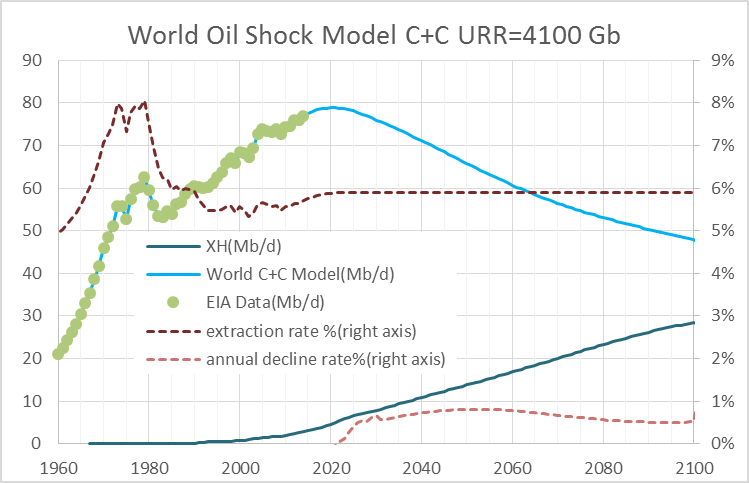 I believe that the USGS estimate is too optimistic and think 3100 Gb for C+C-XH and 700 Gb for XH oil for a total C+C URR of 3800 Gb is as high as C+C output will go (my optimistic scenario).

The Oil Shock Model was first developed by Webhubbletelescope and is explained in detail in The Oil Conundrum. (Note that this free book takes a while to download as it is over 700 pages long.) The Oil Shock Model with Dispersive Discovery is covered in the first half of the book.  I have made a few simplifications to the original model in an attempt to make it easier to understand. 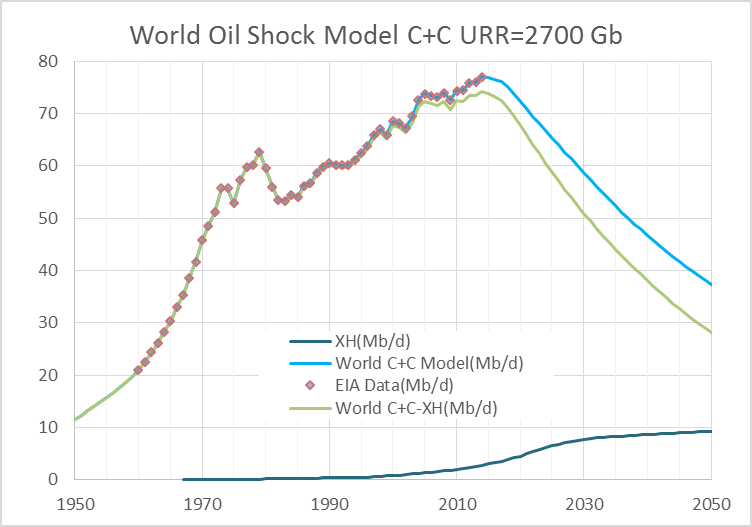 
In a previous post I explained convolution and its use in modelling oil output in the Bakken/Three Forks and Eagle Ford LTO (light tight oil) fields.  Briefly, an average hyperbolic well profile (monthly oil output) is combined with the number of new wells completed each month by means of convolution to find a model of LTO output.
Read more »
Posted by D Coyne at 8:10 PM 42 comments:

The eventual peak and decline of light tight oil (LTO) output in the Bakken/ Three Forks play of North Dakota and Montana and the Eagle Ford play of Texas are topics of much conversation at Peak Oil Barrel and elsewhere.

The decline rates of individual wells are very steep, especially early in the life of the well (as much as 75% in the first year for the average Eagle Ford well), though the decline rates become lower over time and eventually stabilize at around 6 to 7% per year in the Bakken.

What is not obvious is that for the entire field (or play), the decline rates are not as steep as the decline rate for individual wells. I will present a couple of simple model to illustrate this concept.

Much of the presentation is a review of ideas that I have learned from Rune Likvern and Paul Pukite (aka Webhubbletelescope), though any errors in the analysis are mine.

A key idea underlying the analysis is that of convolution. I will attempt an explanation of the concept which many people find difficult.

I think the best way to present convolution is with pictures. Chart A below shows a relationship between oil output (in barrels per month) and months from the first oil output for the average well in an unspecified LTO play.

This relationship is a simple hyperbola of the form q=a/(1+kt), where a and k are constants of 13,000 and 0.25 respectively, t is time in months, and q is oil output. Chart A is often referred to as a well profile. The values for the constants were chosen to make the well profile fairly similar to an Eagle Ford average well profile. EUR30 is the estimated ultimate recovery from this average well over a 30 year well life.

Material was added on May 14 to update my Eagle Ford Model, see end of post.


This is a brief update on Eagle Ford Crude plus Condensate (C+C) output through February 2014.  February Eagle Ford C+C output was about 1200 kb/d by my estimate. 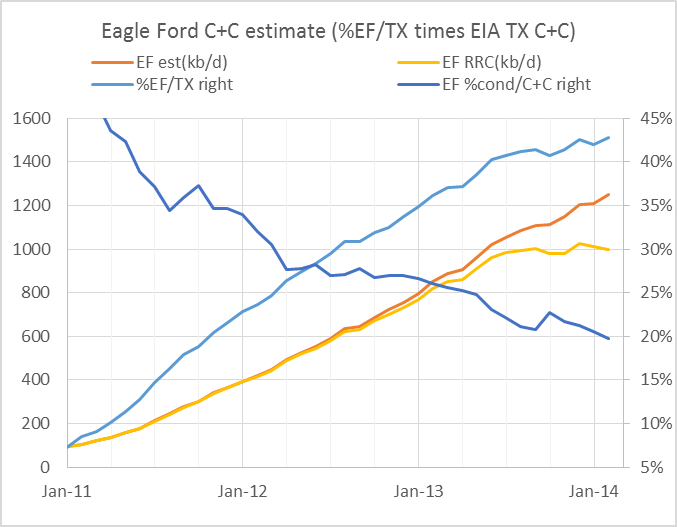 
I have used my usual method of estimation where I find the percentage of total Texas(TX) C+C output that is from the Eagle Ford(EF) play (%EF/TX is the label that I use) and multiply this by the EIA’s estimate of TX C+C output.  The chart shows the Railroad Commission of Texas (RRC) Eagle Ford estimate (EF RRC) in thousands of barrels per day (kb/d), the EF est (kb/d) as described above, the percentage of EF C+C that is condensate (EF %cond/C+C), and the %EF/TX also described above.
As before I would like to thank Kevin Carter who created a method to simplify gathering the Eagle Ford data.