Webster Hubble Telescope (WHT) has a new blog called Context Earth with a cloud hosted server with some of his oil reserve models. See the Red Queen tight oil model 2.  This inspired me to create an interactive spreadsheet which does something similar.


The spreadsheet is called bakken2.xlsx and can be found here on Google Drive.


One difference between WHT’s “red queen tight oil model 2” and my bakken2 model is that the EUR of new wells is about 280 kb in his model and 340 kb for my model at 30 years. 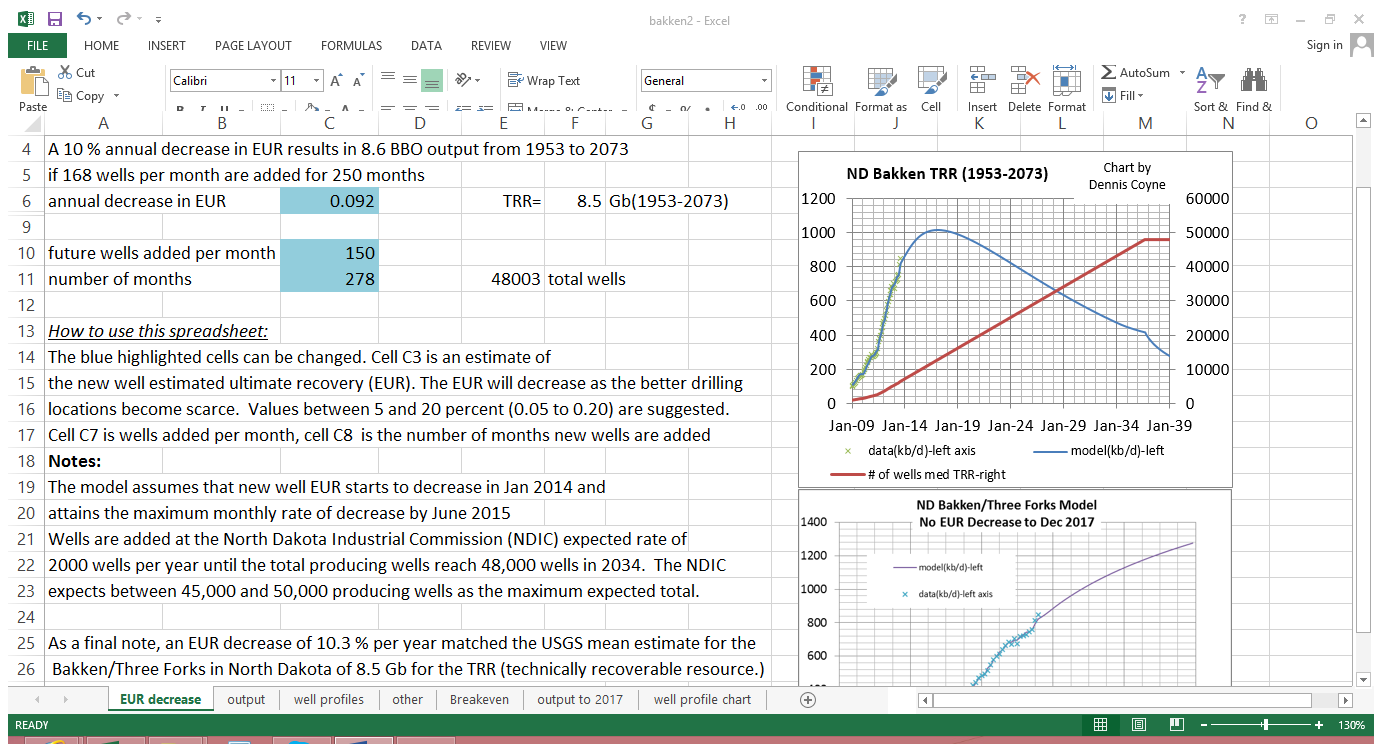 How to use this spreadsheet:


The blue highlighted cells can be changed. Cell C6 is an estimate of the new well estimated ultimate recovery (EUR). The EUR will decrease as the better drilling locations become scarce.  Values between 5 and 20 percent (0.05 to 0.20) are suggested.
Cell C10 is wells added per month, cell C11 is the number of months new wells are added
Notes:

The model assumes that new well EUR starts to decrease in Jan 2014 and attains the maximum monthly rate of decrease by June 2015. Wells are added at the North Dakota Industrial Commission (NDIC) expected rate of 2000 wells per year until the total producing wells reach 48,000 wells in 2034.  The NDIC expects between 45,000 and 50,000 producing wells as the maximum expected total.


As a final note, an EUR decrease of 10.3 % per year matched the USGS mean estimate for the Bakken/Three Forks in North Dakota of 8.5 Gb for the TRR (technically recoverable resource.) 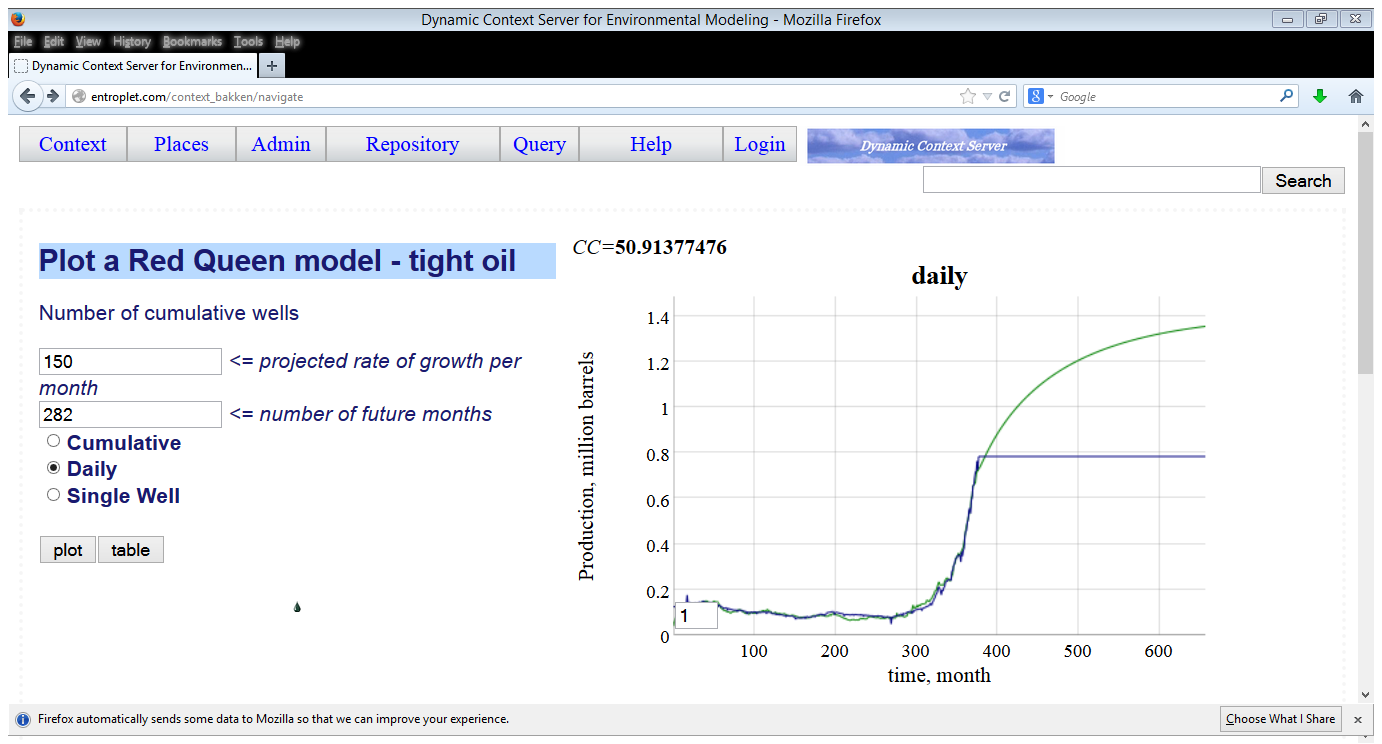 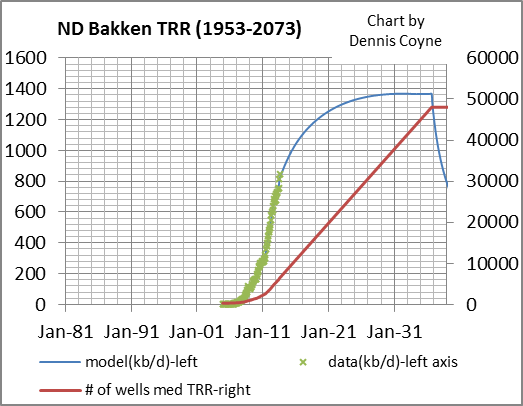 The chart above is scaled in a similar way to WHT's Red Queen 2 Model so they can be compared. Both models add 150 wells per month for 280 months,  my ND Bakken/Three Forks scenario includes a 1 % annual decrease in new well EUR to adjust for the higher well EUR in my model.
The x-axis scaling in my spreadsheet will be from Jan 2009 to Jan 2039, the chart above is shown below with different x-axis scaling, TRR=15 Gb from 1953 to 2073:
The scenario below has a maximum annual new well EUR decrease of 10.2 %, adds 168 wells per month for 249 months(see lower right part of the chart), and has a TRR of 8.5 Gb from 1953 to 2073 matching the mean USGS estimate for the North Dakota Bakken/Three Forks.
Also in the spreadsheet is a chart tab called breakeven, for the scenario above it looks like this: 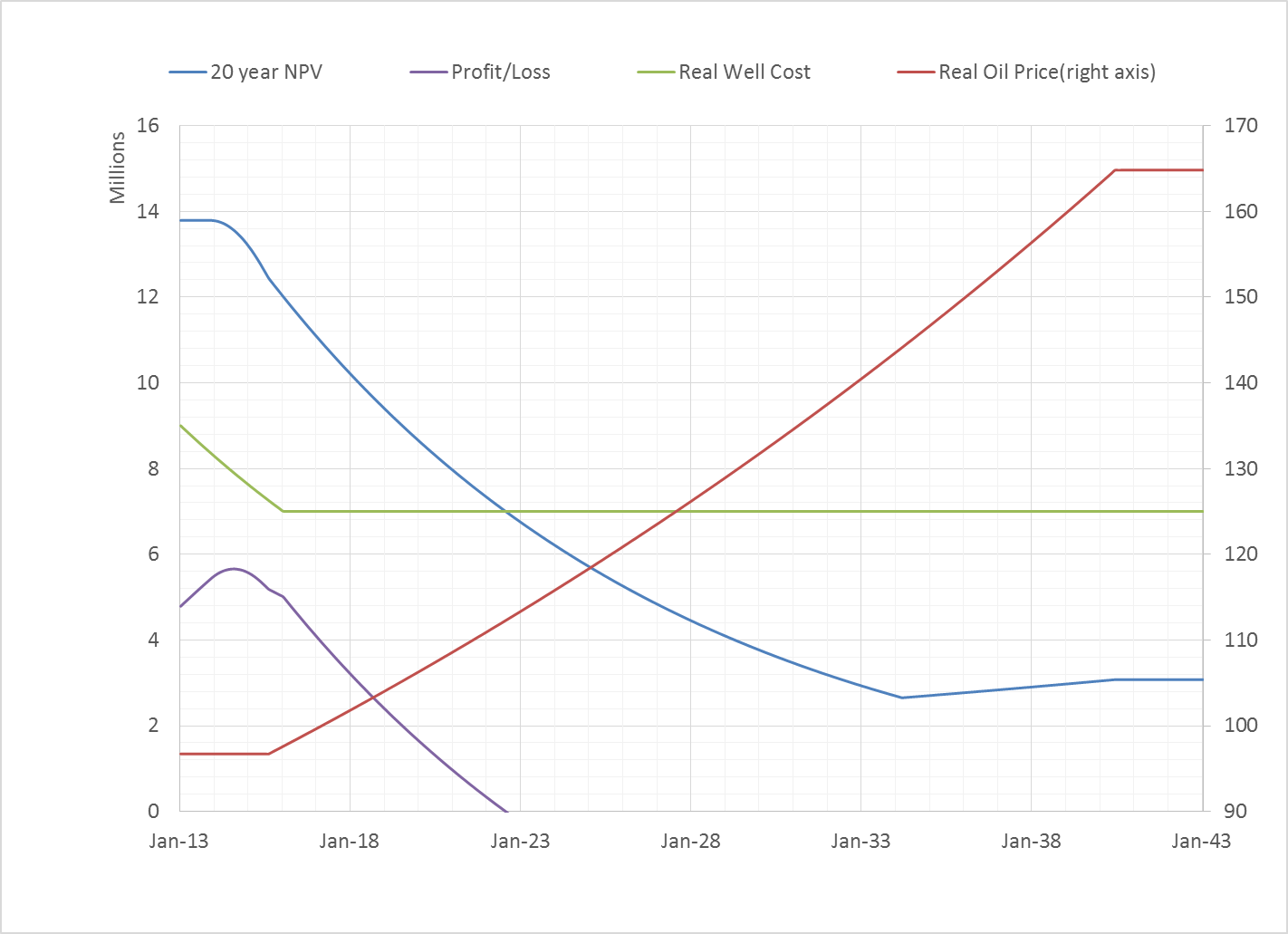