There is a great deal of excitement about the increased oil output from the Bakken Oil field in North Dakota.  A recent post by Rune Likvern at the Oil Drum sparked my interest in this topic.  The EIA estimates that under an optimistic high technically recoverable resource (TRR) case that the Bakken might produce as much as 1 Mb/d by 2021 and then remain at that level until 2035.  A paper by James Mason presents a scenario where Bakken output rises to 1.5 Mb/d by 2020 and remains at this level out to 2045.

At the Oil Conundrum, Webhubbletelescope (WHT) presents a dispersive diffusion model to model Bakken output, based on the data presented in Mason's paper.  He tells us that P-naught(P0) is 2.6 million barrels, but he leaves it to the reader to determine D-naught(D0).

is the equation describing the model and its derivation is presented at the Oil ConunDRUM (link is above). 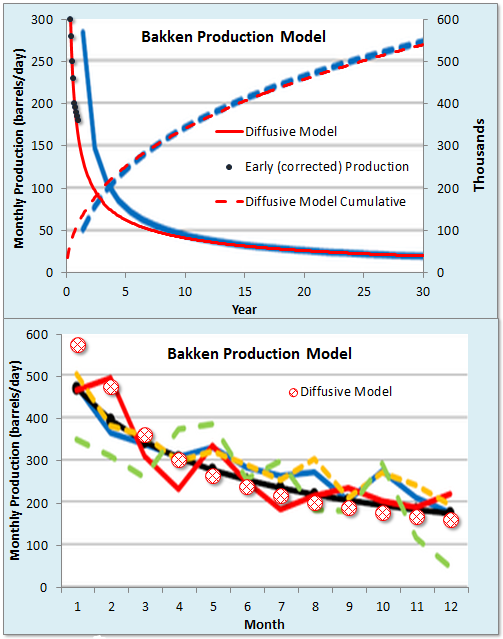 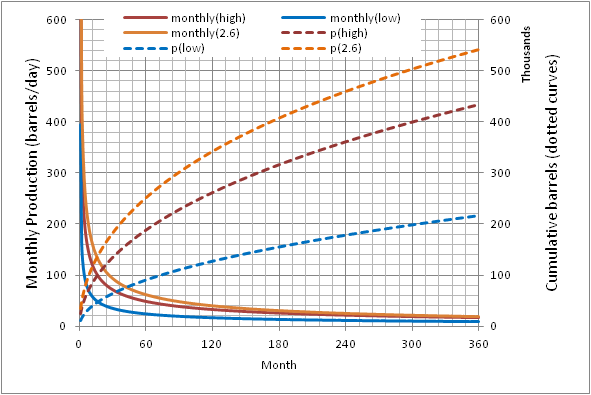 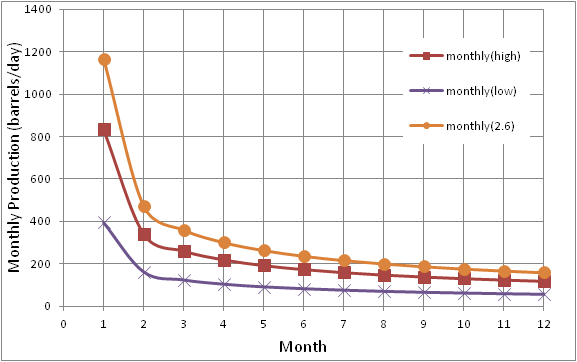 In order to create this model I made a number of simplifying assumptions.  We have the number of wells producing oil for every month from Dec 1953 to July 2012 and the number of barrels produced each of those months.  We are particularly interested in the recent increase in output which began in January 2005.

Using the Bakken Production Model developed by WHT and assuming that the average well follows this model we can create our model in a spreadsheet.  We first find the change in the number of producing wells each month and then assume any increase in the number of producing wells is due to new wells being brought online. We also assume all wells are average wells and we know what the output for every future month will be from those new wells (because we assume they behave as the model predicts.)  Keep in mind that the only input to the model is the change in the number of wells producing each month and two parameters P0=4,175,000 barrels and D0=0.00045, in the equation derived by WHT (see above.)

The first cut is below: 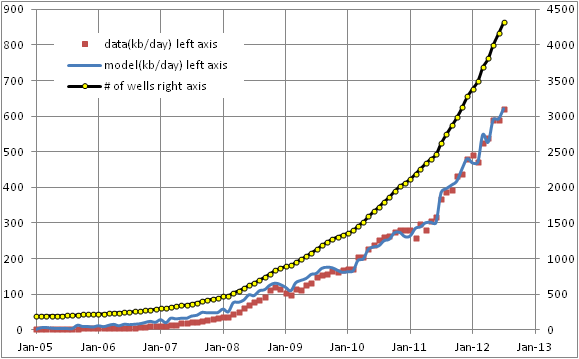 The model matches the data quite well from Jan 2010 to July 2012.  The early part of the data from Jan 2005 to Dec 2007 may not be modelled properly by the "high" model.  The differences are more apparent in the following semi-log plot.  (The plot beyond July 2012 is a future scenario discussed below.) 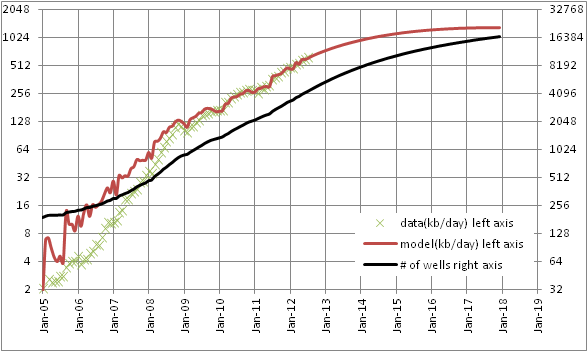 In order to improve the early (before 2010) part of the model I created a "low" model where output per well is about half the level of the "high" model.  This low model was used for wells which started production between Dec 2004 and Dec 2007. 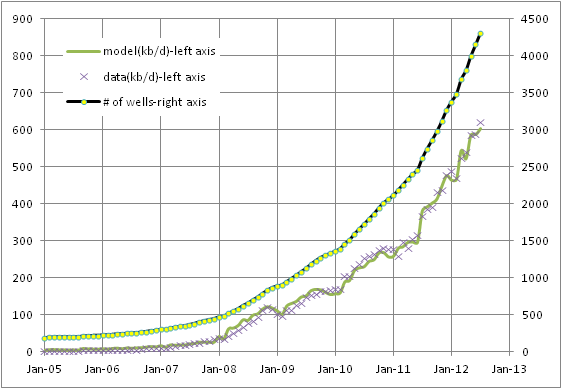 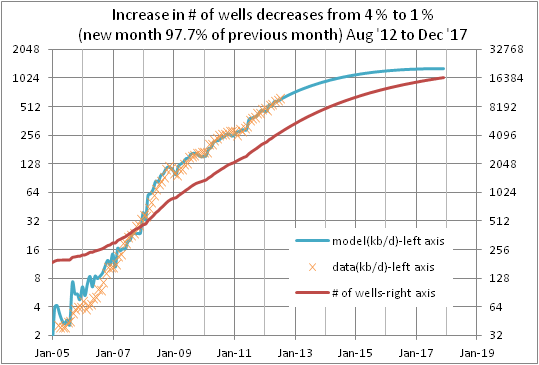 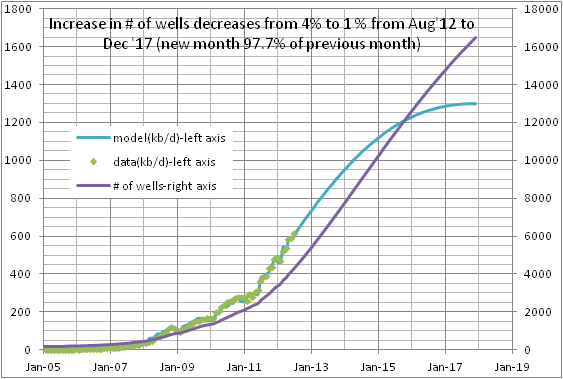 Under these assumptions we see that future output from the Bakken would roughly double by Dec 2017 to 1.3 Mb/d.  This scenario is about midway between the EIA's optimistic scenario of 1 Mb/d by 2021 and Mason's middle scenario of 1.5 Mb/d by 2020, though it reaches the plateau 3 to 4 years earlier than those other scenarios.

The following chart shows contributions to output from various years: 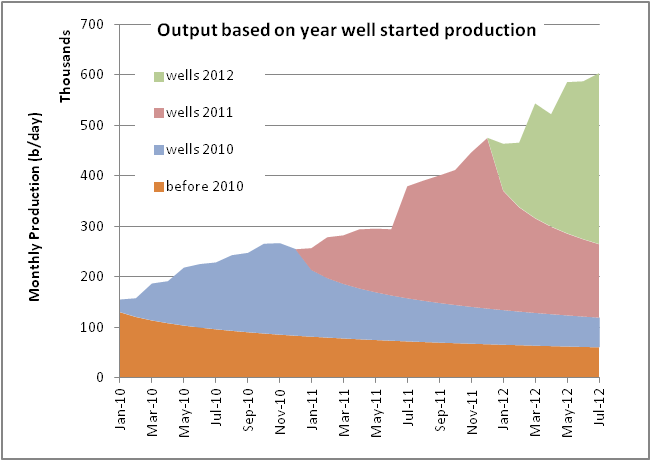 Further modelling could guess at future production models which would likely fall between the high and low models presented here.

In response to a question at the Oil Drum, I have decided to do a crude approximation of falling well productivity in future years.  I did this by assuming the "high" well profile remains valid until Dec 2014.  Abruptly in Jan 2015 all new wells follow the "low"  well profile as presented above.  The rate that new wells are added also increases to compensate for the fall in well productivity.  Clearly in the real world these changes would happen gradually, but this is a rough approximation of reality. 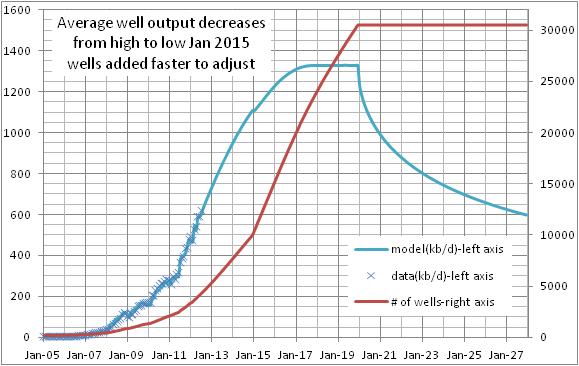 I also have added two more years to Dec 2019 to this model and I show how output would decline if new wells are no longer added.  If this model approximates reality (a rather large if), the plateau could be maintained until April 2023.  At that point we reach 40000 wells and if Mason's analysis is correct,  no more wells would be added in the North Dakota Bakken and decline would begin.  The decline would be a little flatter than shown above due to the extra 9500 wells.

In response to further comments at the Oil Drum, I have attempted to make the model more realistic by creating several average well profiles that decrease by 10 % each year from 2013 to 2019, I also interpolated between the yearly profiles on a monthly basis to make the transition to lower output somewhat smoother.  The rate of increase in wells falls from 4 % to 1 % from Aug 2012 to Dec 2019. 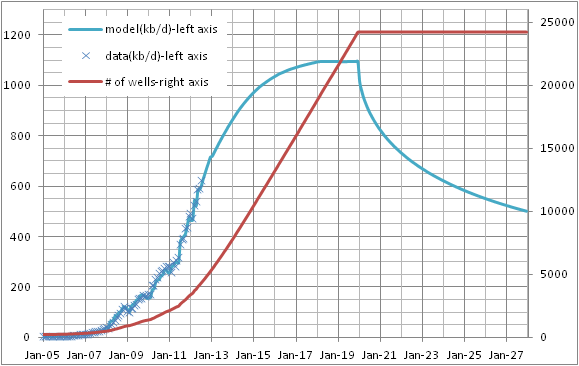