A recent post at Peak Oil Barrel by Jean Laherrere suggested an ultimate recoverable resource(URR) for the North Dakota Bakken/Three Forks of about 2.5 Gb based on Hubbert Linearization.  This conflicts with a recent (April 2013) USGS mean (F50) estimate of 8.4 Gb.  I decided to update my scenarios based on the range of USGS estimates from F95=6 Gb to F5=11.3 Gb for the North Dakota(ND) Bakken/ Three Forks.  Note that at year end 2011 there were 2.6 Gb of crude proven reserves in ND and at the end of 2007 about 0.5 Gb, I will assume all of this reserve increase came from the Bakken/ Three Forks, so 2.1 Gb of proven reserves added to 0.35 Gb of oil produced from the Bakken/ Three Forks gives us 2.45 Gb for a minimum URR.  The Hubbert Linearization points to about 0.05 Gb of undiscovered oil whereas the USGS suggests 3.5 to 8.9 Gb of undiscovered technically recoverable resource(TRR) in the North Dakota Bakken/Three Forks.

Note that Mr. Laherrere has forgotten more about geology than I know. He may have information that I don't have access to or has read the USGS April 2013 Bakken/Three Forks assessment and found that the report was not credible.  I have assumed in my analysis that the USGS analysis is correct, if it is not then my analysis will also be flawed.  I would love to hear from Mr. Laherrere about the specific problems he sees with the USGS analysis, I no doubt would learn much.

In Figure 1 three scenarios are presented which represent the F95, F50, and F5 cases from the USGS analysis.  F95 means there is a 95% probability that the TRR will be higher than 6 Gb and likewise for F50=8.4 Gb and F5=11.3 Gb.  It is assumed in all three scenarios that 175 wells per month are added from Dec 2013 to Jan 2032, about 45,000 wells total.  All oil fields have sweet spots, which are limited in area. When these more productive areas run out of space for more wells, then less productive areas must be chosen for drilling and the estimated ultimate recovery(EUR) of the average new well will decrease. 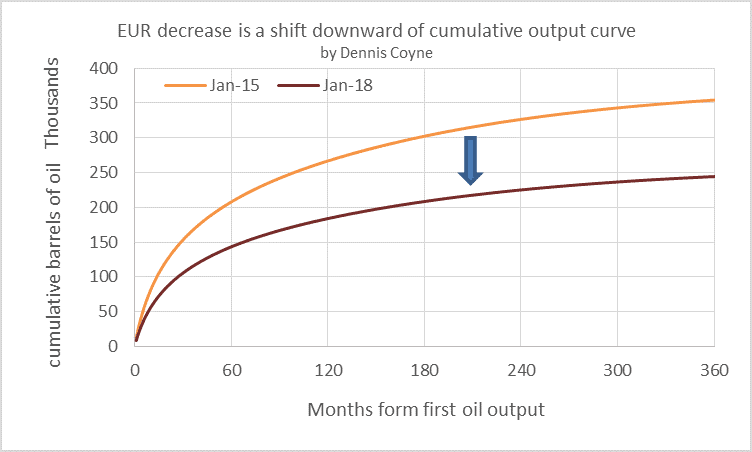 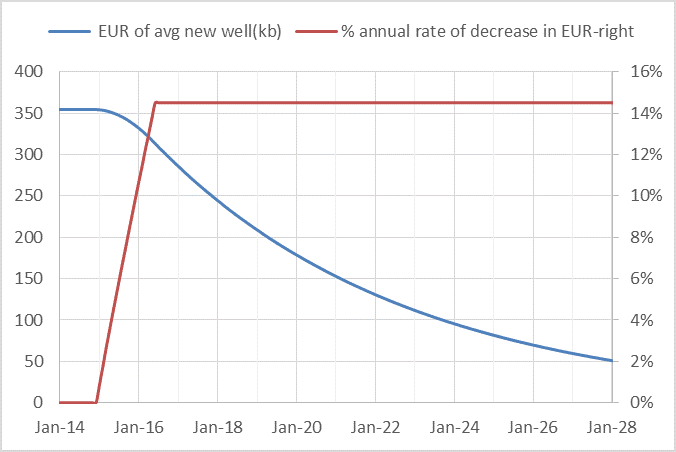 Figure 3 (click to enlarge)
Figure 3 shows how the new well EUR changes (blue curve) over time and the red curve shows how the annual rate of decrease in new well EUR (red curve right vertical axis) changes from Jan 2014 to Jan 2028.  This is for the medium (F50) scenario.
Using the scenarios developed for figure 1, I will now introduce economic assumptions to determine the economically recoverable resource(ERR) for each of the low, medium and high scenarios, the ERR will always be less than or equal to the TRR.  The figure below gives the real oil price in 2013$ per barrel on the right vertical axis and the real well cost, 30 year real net present value (NPV), and real profit in millions of 2013$, the oil price is based on the EIA's 2013 AEO reference case. This chart is from the medium scenario. 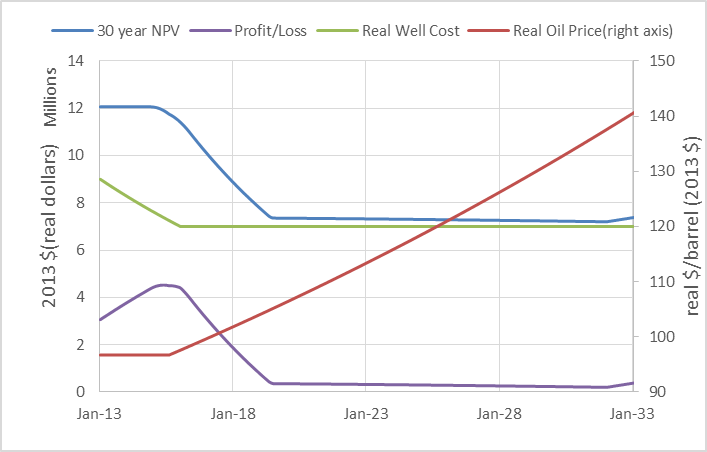 Fig 4-click to enlarge
The other economic assumptions are an annual discount rate of 15%, royalties and taxes are 26.5 %, operating expenses(OPEX) are $4/barrel, and transportation costs are $12/barrel where all $ are 2013$ and all calculations are in real (2013$) terms.  See this post in the text after fig 3 for more information on how these figures are used.  Previously other costs of $3/ barrel were included, but based on information from Rune Likvern, sales from natural gas output probably covers these "other costs" so they have been eliminated.  Any of these economic assumptions will likely be incorrect and are impossible to predict over 5 years let alone 20 years, so these scenarios are very likely to be inaccurate over periods of more than 2 or three years.  If any of the many guesses underlying these scenarios should prove correct then the scenarios might be accurate, that is part of the reason for including a range of scenarios.  Prices, well costs, and transportation costs could all be lower or higher in the future than what I have chosen, lower transportation or well costs would tend to raise output and lower oil prices would tend to reduce output if all else remains equal.
Note the sharp bend in the profit and NPV curve in figure 4 in 2019, this is because the number of new wells added each month is reduced as profits approach zero, for the medium scenario for ERR we have: 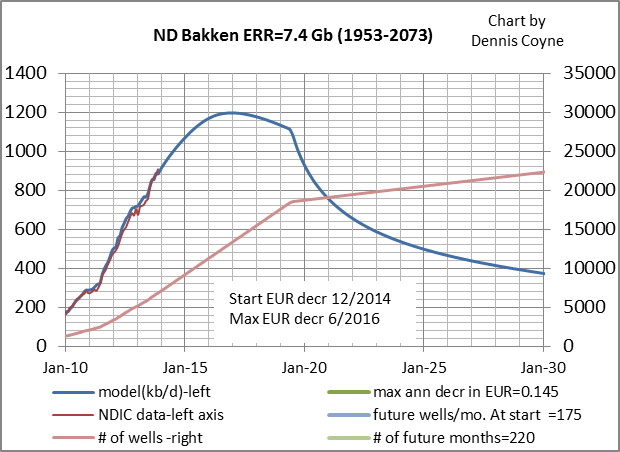 Figure 5-click to enlarge
Note the kink in the # of wells curve where the wells added each month is reduced substantially.  This reduction in the number of wells added also reduces the rate of decrease in new well EUR as shown in the following chart for the medium scenario: 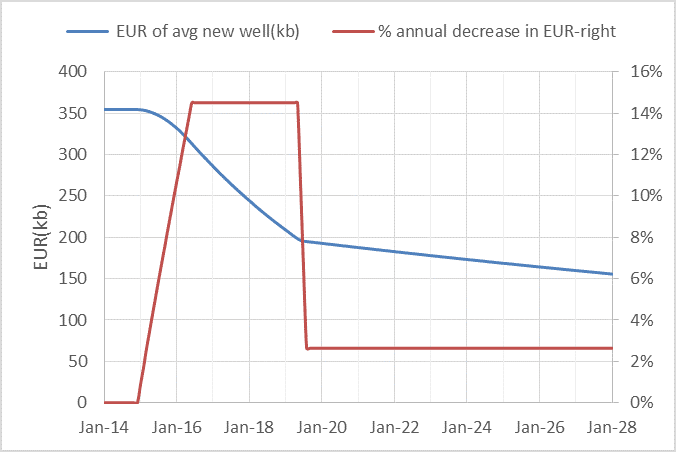 Figure 6-click to enlarge
The chart below gives the range of output for the USGS F95 to F5 estimates when the economic assumptions above are used.  The range of ERR estimates is 5.1 Gb to 10.7 Gb with a best estimate of 7.4 Gb.  The medium scenario peaks in 2016 to 2017 with peak output of about 1.2 MMb/d. 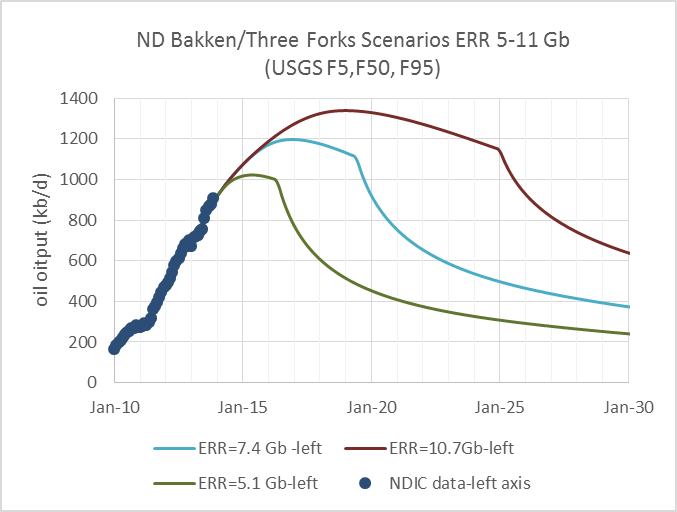 Figure 7-click to enlarge
It would be great to get some feedback from industry pros on the well costs, oil prices, and other economic assumptions I have used and any obvious problems with the analysis.
Dennis Coyne﻿
﻿
﻿
﻿
﻿
﻿
﻿
﻿
﻿
Posted by Dennis Coyne at 3:58 PM